Neither Tutsi, nor Hutu: Author Talk with Prosper Ishimwe 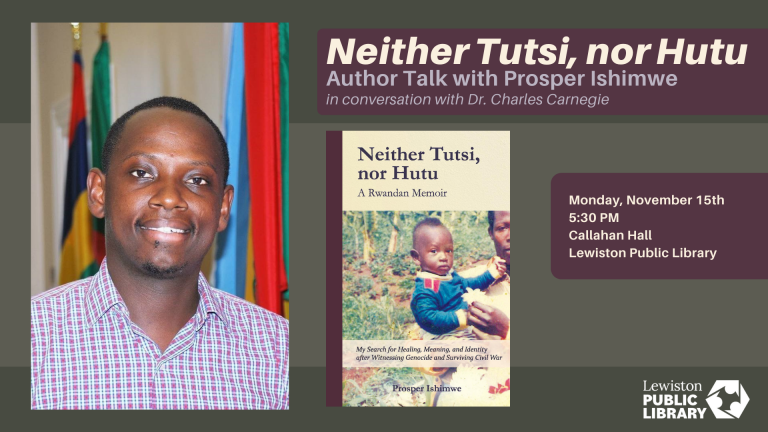 Author Prosper Ishimwe will speak about his book, Neither Tutsi, nor Hutu: A Rwandan Memoir, in conversation with Bates College Professor Emeritus Charles (Val) Carnegie at Callahan Hall in the Lewiston Public Library on Monday, November 15th at 5:30 PM. This free, public program will also include a book sale and signing.

Neither Tutsi, nor Hutu tells the story of Prosper’s journey and offers profound insight into the paradox of ethnicity: its fluid, chameleon character as well as the brutalities performed in its name. Prosper inspires with his belief that individuals, groups, and countries—no matter what “side” of the conflict they take—have the power and responsibility to achieve healing, meaning and unity through truth, empathy, love and forgiveness.

Prosper Ishimwe was eight years old in 1994 when the genocide and war broke out in his homeland and took the lives of over one million people. Coming of age and struggling to heal and find closure after the death of his mother, whom he never got to bury, he was disquieted to learn that talking about the war crimes he survived could antagonize the ruling elite and cost him his life. He ultimately decided to flee his native land so he could tell his story, and found home and refuge in Lewiston, Maine.

Prosper holds an M.A in Global Policy from the University of Maine’s School of Policy and international Affairs (SPIA) and currently works as program manager for Local First Arizona (LFA), a non-profit organization working to strengthen communities and local economies through supporting, maintaining, and celebrating locally owned businesses.

Charles (Val) Carnegie grew up in Jamaica and his family has made a home in Lewiston for the past three decades. He is Professor Emeritus at Bates College where he taught anthropology and African American Studies. His research has focused on race, ethnicity, and nation as modes of classification and on the harmful impact of racism and nationalism. His publications include the book, Postnationalism Prefigured: Caribbean Borderlands, as well as articles and reviews in edited collections and a variety of scholarly and popular journals.

Copies of the book will be available for sale at the event and a book signing will follow the talk.

Neither Tutsi, nor Hutu: Author Talk ...